Were the instructions easy to follow?
everything except the facing/yoke installation. granted, it was literally the second dress pattern i’d ever attempted to assemble, but the yoke/facing instructions completely baffled me. i ended up having to sort of reverse-engineer it, and i didn’t know that it was possible to insert a yoke without hand sewing. frustration!

also, first project with fusible interfacing…exciting times. definitely part of the reason i have switched almost exclusively to sew-ins in the past year!

What did you particularly like or dislike about the pattern?
it had a simple, clean elegance that was appealing, especially when i got a vision in my head of this sort of suit-blouse alternative: oxford cotton shirting for the yoke and cuffs, and tropical wool suiting for the dress body. 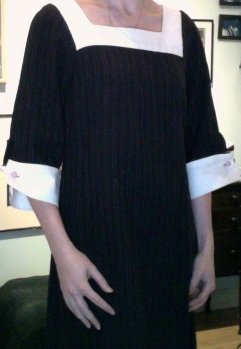 Pattern alterations or any design changes you made:
contrast yoke and cuffs instead of main fashion fabric. i added some interior hand embroidery when i realized that i needed to sew the yoke/facing to the dress. i piped the interior yoke in contrast navy blue and ran a line of long basting with pink embroidery thread along the yoke/dress join edge.

finished the lining with a sweet bit of lace trim from pacific trimmings and covered the raw edge of my blind hem on the dress itself with the wright’s hem lace stuff you can get at jo-ann’s. LOVE that stuff.

Would you sew it again? Would you recommend it to others?
might sew again if the right fabric came along or i wanted something simple, but in general i have long since moved beyond this pattern. but for me a year ago (literally, when i started sewing the pattern) it was exactly the perfect task for a beginner with a long weekend to fill with a project.

Conclusion:
great little dress. no lie, i literally cut and constructed about 85% of this pattern in one sitting on MLK weekend, 2010…and then let it sit until the week before christmas, 2010…when i finished it in about an hour-and-a-half of hem wrangling.

This entry was posted in Finished Objects, Pattern Review and tagged dresses, modern. Bookmark the permalink.