i have to admit that it was news to me when i saw peasant looks such as these going as far back as the 1940s. in my head, these had always been such a 70s symbol, or a natural retreat for a suburban teenager fancying herself a bit more bohemian and retro than her high school counterparts (ahem).

but maybe it makes a lot of sense. after all, there were a lot of looks in the 70s that could be construed as a modern (for the times) interpretation of the 1940s–such as the YSL safari suit, which i think looks a lot like some the beautiful belted women’s suits of the 40s.  and so much of the fall 2011 runway screamed “70s does 40s” to me.

malandrino fall 2011 (from tom and lorenzo)

this is all by way of saying that i can see, sort of, how the 40s peasant style would naturally be reinterpreted and continue to be explored.  but really, the fun bit for me was discovering that even in the 40s, teenage girls loved to play with simple, feminine ruffles.

i spent some time acquiring both patterns in the hopes of making a matching set.

i didn’t quite go all out on the ruffle, although i have enough ribbon to.  i just love the yellow trim, which is exactly the same shape as some of the yellow designs on the tuesday trees print.  i do think it needs a bow, though.

so then i had a strip, literally, of flowery meadow left over from my mccall party dress.  i also had some strange crinkle cotton from paron’s leftover from a SWAG birthday dinner dress for my sister.  (that she refuses to photograph for me).  and i still wanted to make that top. 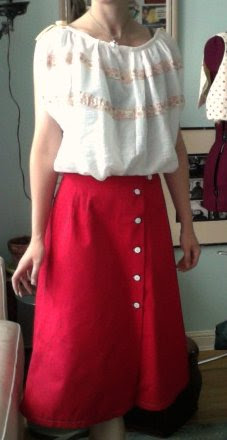 obviously, side seams…need some serious nipping and tucking to get a more 40s-style waist.  notice how that didn’t stop me from adopting it into my summer SWAP.

matched top?  what matched top?
oh…the one cut up, unsewn and “put away” somewhere i can’t even find it.

in the meantime, my peasant-inspired skirt, in a print i ordinarily would never consider, has become a go-to when mixing with basic, comfortable and retro-inspired solids.

what can i say–yellow makes me happy.

This entry was posted in Finished Objects, Vintage and tagged 1940s, skirts, tops. Bookmark the permalink.