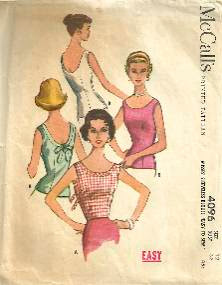 i’m thinking that maybe i have a weakness for bows.

because, really, that is what drew me to this top. it’s chic, it’s modern, it has a great 60s vibe…and a bow. yeah, ok, i love the neckline, especially in the back, but really, it’s about the bow. 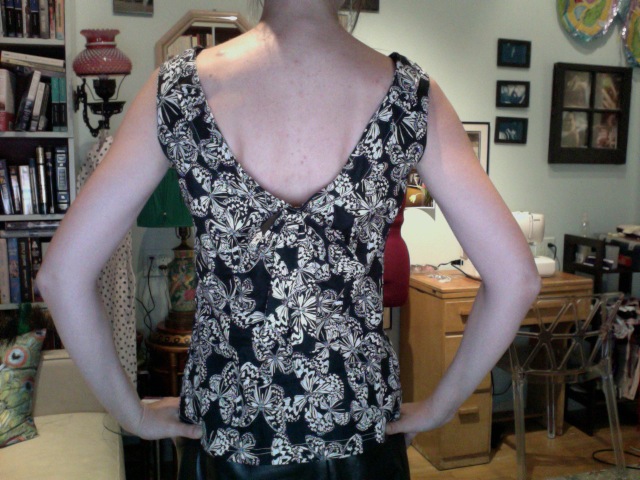 the instant i saw this pattern, i had to have it.  and it took some searching!  i’m pretty sure i ended up tracking it down from some random google checkout owner who runs a shop.  i don’t even remember, because i didn’t care–the pattern would be MINE.

one my first construction run, i was befuddled by the facing and bias band instructions.  there was a lot of hand sewing involved–it’s an all-in-one facing–and i wasn’t interested.  i ended up using the facing to finish the raw edges of the armholes and then using the bias band to finish the raw edges of the neckline.  i do have one or two instances of ugliness on the bias band, but fortunately the butterfly print on the fabric makes this unnoticeable to anyone who doesn’t sew. 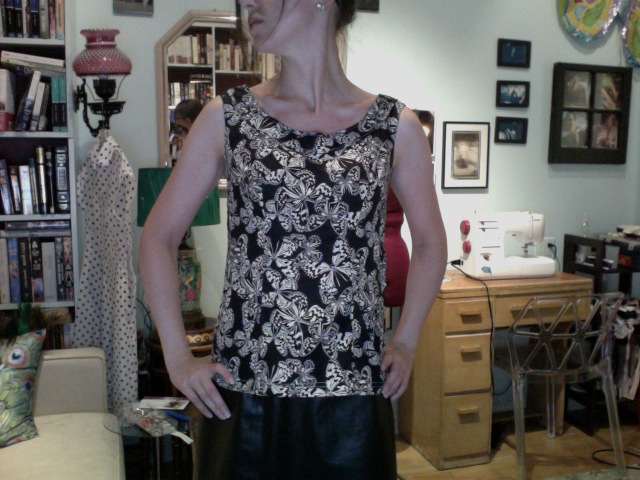 on my second go at construction, i forgot all of this and just eliminated the facing entirely, and inadvertently halved the width of the bias band in my new construction method.  and i have yet to attach the bow. 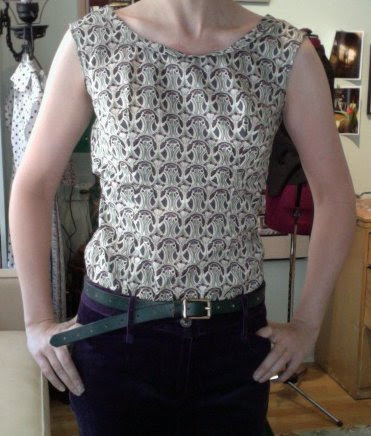 my third version came out of nowhere–because of the cutting layout for my peasant skirt, i had a large triangle leftover of tuesday trees print.  already on the bias!  therefore it became another bias band, this time for a version to match the skirt.  (it also still lacks a bow)  i actually had to make this version twice, because i was tweaking the fit…. with a sharpie…on the pattern tissue…which was already spread out over my fabric.  (there’s another one to add to my “ask me how i know” collection of sewing mistakes…) 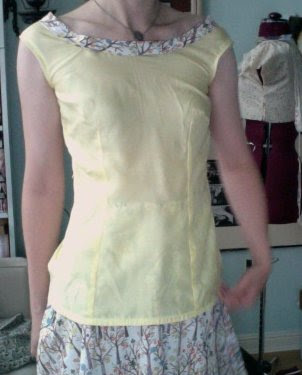 i’m still having some trouble with the darts, which are huge bubble darts, narrow for most of the bodice and then rounding out, like a balloon.  presumably in the 60s this was the best way to accommodate whatever undergarment was a la mode, but for me it was just a huge issue.  this yellow version, though, has become a great go-to with a light brown pencil skirt and a colorful cardigan–red, turquoise, or even purple all pick up colors from the tuesday trees print, giving a lot of options.

This entry was posted in Finished Objects, Vintage and tagged 1960s, tops. Bookmark the permalink.